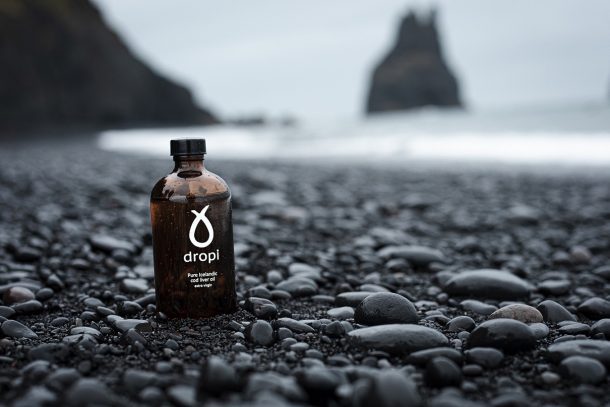 Icelandic cod liver oil manufacturer True Westfjords, e.h.f is taking the art of cod liver oil extraction back to its roots with its botanically enhanced range under the brand name “Dropi.” The company reached back 1,000 years to recreate the ancient technique of cold-process extraction applied by the Scandinavian nation’s Viking settlers. True Westfjords is setting the gold standard for 100% pure, natural, extra-virgin cod liver oil in its rawest form to establish a new category of clean fish oil that assures the retention of its long-recognized health benefits.

Treasured as “the gold of the ocean,” The Vikings were the first civilization to extract the oil from the livers of the deep-sea Atlantic cod (Gadus morhua) as a means of boosting overall health and vitality. Legend even had it that it gave Viking warriors their strength. Passed down through the generations, this tradition has been venerated as a key element of Nordic health routines as well as of many northern European coastal communities.

A clean drop of the Atlantic Ocean’s gold

“Our ancestors knew something about the beneficial qualities of cod liver oil even before it came under scientific scrutiny—and they knew how to glean its full value,” enthuses Óttar Kristinn Bjarnason, Director of Sales and Marketing for True Westfjords. “We source our cod liver exclusively from the local daily wild catch of fresh fish that swim in the deep blue waters of the North Atlantic Ocean, one of the cleanest fishing grounds in the world. We have a close relationship with the local fishermen, on whom we depend to supply us with fresh cod livers as we complete the oil extraction process within 24 hours of receiving them.”

The fishermen work off the coast of Bolungarvík, situated in the Westfjords of Iceland and one of Iceland’s oldest fishing communities. The oil is extracted exclusively through cold processing to preserve the natural composition of beneficial fatty acids and vitamins. Content of these compounds is confirmed via third-party labs in Denmark and Germany. Natural antioxidants are added as a preservative to prevent rancidity. One serving is 5ml (compared to 15ml for other CLO sources) and contains approximately 13mcg of vitamin D3, 1,130mcg vitamin A, and 1,200mcg of omega 3s. “Content varies slightly from batch to batch, depending on the size of the fish, but mostly on their diet,” notes Bjarnason. “We once extracted orange oil because that particular catch of cod were fed on krill.” Consuming just a teaspoon of this highest-quality cod liver oil provides nearly all your daily requirements for vitamins A and D, and well more than the minimum suggested amount of total omega 3s.

Icelandic heritage in a bottle

The creation of dropi began as an MBA project in 2012 at the University of Iceland. Led by three women—Anna Sigríður Jörundsdóttir, Birgitta Baldursdóttir, and Sigrún Sigurðardóttir, the team subsequently founded True Westfjords. “We were alarmed by how far away industrial CLO production processes had steered from its source,” states Jörundsdóttir. “We felt compelled to take this vital elixir back to the natural way our ancestors made it, even though it entails a more arduous process. We apply very gentle extraction, so the oil is not boiled or overheated and does not lose any of its innate, highly extolled nutrients. This also removes the need for any fortification with additives.”

In cooperation with food processing consultants Matis Ohf, True Westfjords invested three years in developing and perfecting the Dropi formulation before going to market. While CLO has long been revered for its multifaceted benefits, its inherent fishy overtones have made it somewhat difficult to enjoy for some consumers. Dropi comes in a range of flavors, each infused with a natural extract of organic ginger, fennel, mandarin, or spearmint to overcome any flavor challenges. Dropi CLO is also available in capsule format. All True Westfjords CLO products are considered raw and are manufactured according to European standards of Good Manufacturing Practice (HACCP).

While the Dropi line of cod liver oil is currently available in stores in Iceland, its biggest platform by far is Amazon.com, followed by other online retail sites in the US. “We continue to expand Dropi’s reach internationally and have distributors in Europe and the US, the current largest global market for fish oils,” says Bjarnason. “We have also begun negotiations with retail outlets and distributors in other regions.”