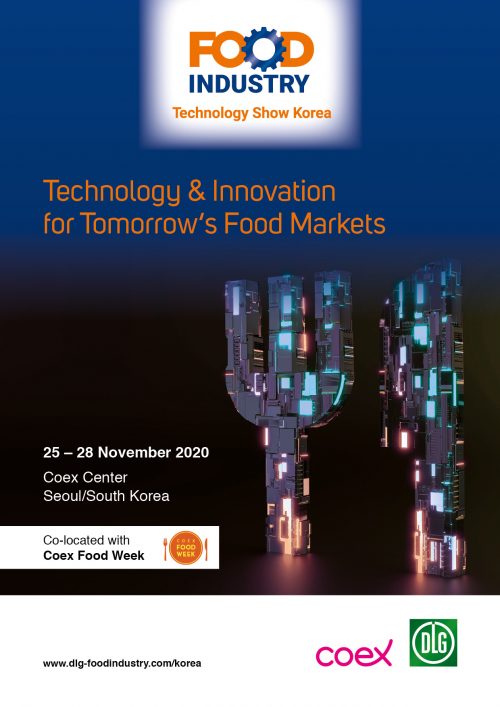 The Road to Industry 4.0: South Korea’s food industry is banking on digitalisation and flexible automation

New trade fair for international food technology – Premiere parallel to Coex Food Week, the leading trade fair for foods and beverages in the markets of North and East Asia – 25 to 28 November 2020 at the Coex Center in Seoul (South Korea) – cooperation between DLG and Korea’s leading trade fair organiser Coex – www.dlg-foodindustry.com/korea

(DLG). South Korea’s international food hub is located in the heart of Asia. Here in Iksan, approximately 180 kilometres from Seoul, lies the site of Foodpolis. The country’s leading food cluster is home to 160 companies and ten R&D centres. The ambitious project is devoted to researching, developing and processing food. The goal is to supply the entire Asian-Pacific region, which comprises approximately one-third of the global consumer market.

In South Korea itself, the food market is also booming and imports are rapidly increasing. On the one hand, this is related to the domestic food industry, for it covers only approximately half the needs of the population. On the other hand, the growing prosperity results especially in younger consumers demanding more high-quality and diverse food – in particular from abroad. In addition, customer requirements are becoming increasingly individual; they demand products in smaller lot sizes, and therefore systems that can be flexibly converted.

In the face of higher labour costs and growing competition in neighbouring countries, the industry is searching for drivers of growth for this reason. With its Industry 4.0 strategy, Germany is considered the benchmark in this context. By building intelligent factories, the South Koreans are hoping to also implement the fourth industrial revolution there – flanked by the Smart Manufacturing Innovation Strategy, with which the government is pushing for the qualification of 50,000 employees by 2022. “For the Korean food industry, topics like digitalisation, networking and automation play an increasingly important role. In the entire region, manufacturers require fully automated process and packaging technology to increase their productivity and to keep up with the demand from consumers”, emphasises Simone Schiller, Managing Director of the DLG Competence Center Food (Fachzentrum Lebensmittel).

Food manufacturers will have access to automation and digitalisation from 25 to 28 November 2020 in Seoul at the trade fair Food Industry Technology Show Korea (see box). The new trade fair and conference format focuses on developments and offers international food technology and its relevance for the markets in Northern and Eastern Asia. Efficient processes which enable a higher degree of convenience than just a few years again and rising food quality are in demand.

The availability of market-ready solutions meanwhile enables the realisation of the first modular concepts, which promise productivity boosts in all phases of system life cycles. The trend is away from a central process control system to modules with their own automation functions and control systems – a changeover that also enables the transition from batch to continuous production. The goal is the direct communication of the individual system modules in real time, i.e. machine-to-machine communication (M2M). And it lives from the close links and consistency of the available data.

Static IT solutions quickly reach their limits here, for the intelligent factory consists of decentralised production environments with various components, each with their own data sources. The growing data quantities can now hardly be processed and evaluated ad hoc without cloud computing. In future, data clouds will not only be used on the management level, but also on the shop floor. The challenge here: Mapping virtual and synchronising it with actual production.

Against this background, experts expect the number of “smart” sensors that communicate with each other in production to increase considerably. While in the past most sensors supplied a binary or analogue output signal, this is currently changing. Solutions with an IO link interface independent of the manufacturer, which enable bi-directional communication, are on the advance. In addition to variables like pressure, volume and temperature, these sensors also detect oscillations and vibrations. Production is to monitor itself to a great extent based on these status data. And after-sales service will also be characterised by smart sensors, as maintenance tasks will no longer be carried out time-based at intervals, but instead condition-based.

However, even more is required to fully utilise the advantages of sensor technology in the Industry 4.0 environment: Big data and artificial intelligence (AI) – and with them mathematical models which analyse complex machine and process states. Industry 4.0-suitable sensors have not only outputs for system control, they also have additional interfaces. They are in contact with cloud services via these. However, AI need not necessarily be localised in the cloud. Thanks to ever greater computing power, the data can also be evaluated locally directly on the shop floor at the machine in order to increase performance and productivity. The food producer therefore maintains the complete sovereignty over its machine data.

Meanwhile, in South Korea a large number of successful projects have been launched. An ideally typical greenfield project, as in the case of Foodpolis, can be based on a modern infrastructure from the outset. In contrast, reality is quite different for brownfield factories. Their plant equipment has in some cases been in use for over 15 years and is based on a different infrastructure than that required by a smart factory. “The integration of existing machines in smart processes by means of modern sensors and actuators therefore plays a central role at Food Industry Technology Show Korea”, says Simone Schiller looking ahead to the upcoming event.

Human beings and robots side by side

Technical innovations are not only opening new doors in the area of sensor technology. While up until now robots primarily paid off in industries that produce standardised products in large quantities, they are increasingly being used in the food sector – most notably in South Korea. With regard to the robot density, after Singapore the country holds second place worldwide, as shown by the figures of the latest World Robotics Report. In comparison: With 774 industrial robots per 10,000 employees, the Republic of Korea uses more than twice as many units as Germany or Japan.

With a share of approximately four percent, the number of units installed in the food industry is still low and robots predominate in non-critical segments, like palletising and packing stations. On the other hand, in contact with open foodstuffs, the mechatronic equipment of the robots must fulfil more demanding hygienic requirements – an aspect that is at the top of the agenda of the accompanying technical program of the Food Industry Technology Show Korea. Small, light, convenient and above all flexibly networked – that’s how engineers imagine the industrial robots of the future. Collaborating robots, the “cobots”, are the spearhead of this development. They operate with sensitivity and precision thanks to their torque sensors in all axes. They are more flexible and offer a greater range of applications than classic robots, as they share the same working space with human beings. If an unexpected contact occurs, cobots reduce their working speed and their kinetic energy to a level that prevents injuries – completely without protective fences.