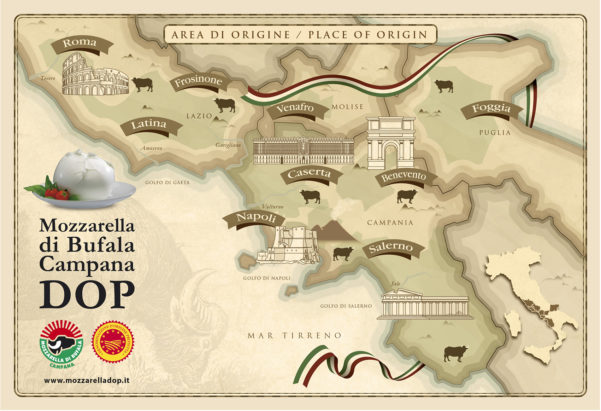 Consorzio di Tutela – Established in 1981, it has made possible the attainment and registration of the Geographical Indication (GI) Mozzarella di Bufala Campana.

History – If the presence of the buffalo in Italy goes back to before the year one thousand, the first historic documents show  the word ‘mozzarella’ in the twelfth century.

DOP – This is the only ‘mozzarella di bufala’ on the market to have obtained the European DOP recognition. The production regulations require the exclusive use of fresh, water-buffalo milk from the farms in the DOP area. Around 4 liters of buffalo milk are required to make 1 kg of Mozzarella di Bufala Campana.

Nutritional values – It is particularly nutritious at 288 kcal/100 g., with the presence of 17 g. of protein, 24 g. of fat, above all unsaturated fatty acids and short chain fatty acids that can be easily transported in the blood rather than kept in adipose deposits; cholesterol is no greater than 50/60 mg., less than meat and eggs and far below the maximum limits of the World Health Organization = 300mg/day. There is very little lactose, less than 0.4 g.

Preservation – It is advisable to eat it on the same day as it is bought. Otherwise, it should be kept in a cool place (10° ÷ 15°C), still immersed in its own liquid. If placed in the refrigerator, it should be taken out some good time before being eaten so that it can be served at room temperature and its true flavor can be enjoyed.

Note – The word ‘mozzarella’ is considered by international food legislation as a generic expression (like pizza, pasta, etc.), used throughout the world for products without any links to historic, cultural and artisan traditions. The DOP brand has permitted the original product, its territory and, above all, its unmistakable flavor to be known but, more importantly, it has permitted the consumer to distinguish non certified mozzarellas from the Mozzarella di Bufala Campana which is subjected to a vast number of controls, from the buffalo farming to consumer sales.