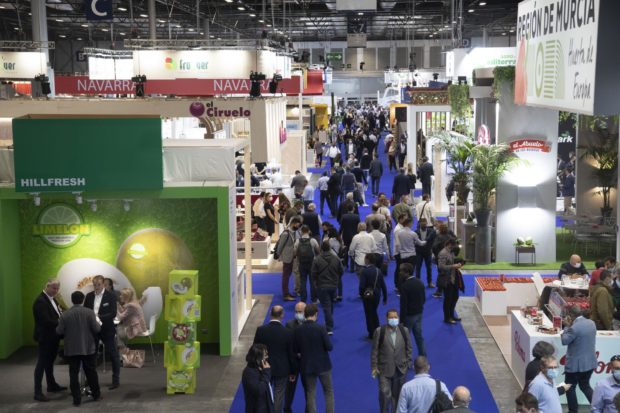 Fruit Attraction has closed the doors on its 13th in-person event with the participation of 62,000 professionals from 110 countries, exceeding all goals and expectations set by IFEMA MADRID and signifying the return of international fairs representing the fruit and vegetable sector. This year’s Fruit Attraction was decisive for the industry as a whole, thanks to its ability to bring together professionals with maximum decision-making capacity, confirming that it is the right place at the right time in terms of seasonal planning – in short, the essential international event when planning the year ahead.

The fair confirmed its role as a key event with a global approach to fruit and vegetable marketing, with its ability to promote the sector’s global exports, providing a commercial hub for professionals throughout the entire value chain and an innovation framework for the fruit and vegetable industry.

The general air of confidence shown by sector professionals at the fair was also reflected in the number of international visitors, which represented 37% of the total. Once again, those from Europe were the most numerous in the international segment, with a significant number of attendees from France, Italy, Portugal, the Netherlands, the United Kingdom, Poland and Germany. The number coming from Latin American was also significant, with a large attendance from Peru, Chile, Mexico, Colombia Ecuador and North America. Neither should we overlook the number who attended the event from the MENA region. In short, Fruit Attraction once again confirmed its position as a key commercial event in the areas of world production, marketing and distribution.

Fruit Attraction offered participants a platform for gaining international momentum and expansion through the International Guests Programme, in association with the Ministry of Agriculture, Fisheries and Food and ICEX, which attracted 600 major buyers, retail purchasing managers, importers and wholesalers from 67 countries to Madrid.

As far as the exhibitors were concerned, international participation accounted for 46% of the total, with 600 foreign companies from 43 countries. Special mention should be made of the significant presence of exhibitors from Europe, especially from Italy and France. It is also worth highlighting the sizeable contingent from Latin America, mainly from Colombia, Peru, Costa Rica, Ecuador and Mexico.

In the domestic sphere, Fruit Attraction 2021 was attended by companies from all of Spain’s production areas. A total of 703 companies, whose success mainly lies in the great attraction of Spanish fruit and vegetable production on international markets, especially in a key month for planning seasons.

Once again the Fresh Produce exhibition area accounted for the highest percentage of participation – 65%. Auxiliary industries, representing a further 18%, also had substantial weight, showing all the strength of the fruit and vegetable sector chain. In addition, companies specialising in logistics, mobility, IT and cold chain management for fresh and frozen foods were well represented at Fresh Food Logistics. There was significant growth in the Biotec Attraction and Smart Agro segment. All this demonstrated the entire sector’s firm commitment to the success of this special retail edition.

As part of Fruit Attraction, the Innovation Hub Awards were presented, which this year were awarded to VallOndo, which won with its mushroom self-cultivation kit in the Fresh Product category and ClassPack, with its Bio Salad Roll in the Auxiliary Industry section. In the Sustainability and Commitment Actions category, the jury gave its award to Manter Ibérica for its Leaf machine.

The fair also hosted the award ceremony for the winner of the first Fruit Attraction Podcast Contest – Stories of #agroinspiration, which promoted new communication formats within the agri-food sector. The winner was the podcast Holidays and Lifesavers by Looije.

A comprehensive conference programme makes Fruit Attraction the knowledge centre for the sector, with this year’s sessions characterised by the wide variety of content and the high calibre of participants and speakers.

The most notable days of this edition will continue to be available on the still-active Fruit Attraction LIVEConnect platform, allowing professionals to continue to contact other agents in the sector.

As far as IFEMA MADRID’s commitment to sustainability was concerned, Fruit Attraction again collected fruit and vegetables from exhibitors for the Madrid Food Bank, bringing in over 29,000 kilos of fruit and vegetable products for socially-responsible use. This is an initiative that seeks to tackle the loss of food, in line with Spain’s first Food Waste Act, recently approved by the Council of Ministers.

For a further year, the IFEMA MADRID and FEPEX-organised Fruit Attraction 2021 had the support of the Ministry of Agriculture, Fisheries and Food at its opening ceremony, which was again chaired by the government minister Luis Planas.

This year’s Fruit Attraction was also supported by the Comunidad de Madrid regional government within the framework of a collaboration agreement with IFEMA MADRID, which seeks to support companies in their digital transformation and internationalisation, furthering the common goal for which both institutions work, including the economic and international promotion of Madrid.

The next Fruit Attraction will be held in Madrid from 4 to 6 October 2022 under the direction of María José Sanchez, the new head of IFEMA Madrid’s agri-food area.