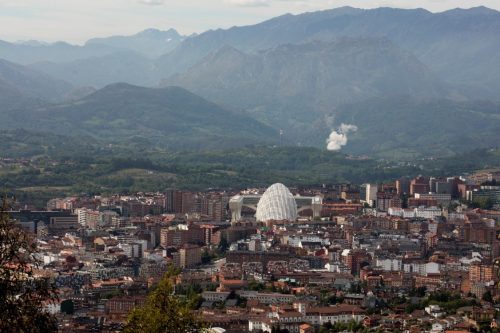 The Guild of Fine Food has announced that the World Cheese Awards will be held in the Spanish Principality of Asturias this year, taking place in Oviedo on Wednesday 4 November. Forming part of the Asturias Paraíso Natural International Cheese Festival 2020, run by the Instituto del Queso, the 33rd edition of the competition will headline a four day festival dedicated to cheese, staged at the city’s awe-inspiring Palacio de Exposiciones y Congresos.

Uniting the global cheese community, from cheesemakers to cheese lovers and everyone in between, World Cheese Awards 2020 is set to be bigger and more international than ever before, following a record-breaking 3,804 entries from 42 different countries judged in Bergamo, Italy last year. Due to take place on the first day of the International Cheese Festival, running from Wednesday 4 November until Saturday 7 November, the World Cheese Awards judging will signal the start of one of this year’s most important gastronomic events.

Welcoming judges from over 30 different countries, cheese from six continents and followers from every corner of the globe, Oviedo will become the centre of the cheese world this November. Building upon the Asturias region’s rich cheesemaking heritage, the International Cheese Festival will present a packed programme of events for both consumer and trade visitors, including an exhibition, a cheese market, a scientific cheese congress, tours of the World Cheese Awards judging arena, experimental tasting sessions, an Asturian Agriculture Forum and even a gastro cheese comedy line-up.

John Farrand, managing director of the Guild of Fine Food, organisers of the World Cheese Awards, commented: “It gives me great pleasure to announce Oviedo as the host city for WCA 2020, following an extremely impressive bid from the Principality of Asturias, the City Council of Oviedo and the Instituto del Queso. We received interest from potential host cities across the world, but the opportunity to bring WCA to Asturias was too good to miss, not least due to the region’s whole-hearted commitment to its food culture. From the peak of the mountains to the depths of the sea, this is one part of the world where you truly can eat the view. With up to 4,000 cheeses from over 40 different countries expected at WCA 2020, the competition will be bringing a global celebration of cheese to Oviedo, putting the city firmly on the map of top international food destinations. Thousands of food professionals, buyers, retailers, consumers and tourists will be making their way to the city for one of the biggest cheese events the world has ever seen, creating a lasting food and drink legacy for the region.”

Luisa Villegas, managing director of Instituto del Queso, organisers of the International Cheese Festival, added: “It’s a wonderful opportunity to have a date set in the world calendar of gastronomy and cheese. It will be a meeting point to speak about science, health and the food of the future. Indeed, the Festival wants to build a space where technology, traditional artisan cheesemakers and science-based novel biotechnological processes will align together to work towards new business models. Cheese has to set an example in innovation, and of course, the producers, the cheesemakers, and the agrifood industry will be the main protagonists of the Festival.”