Home News SIGEP 2022, THE DOLCE WORLD WE WERE ALL WAITING FOR 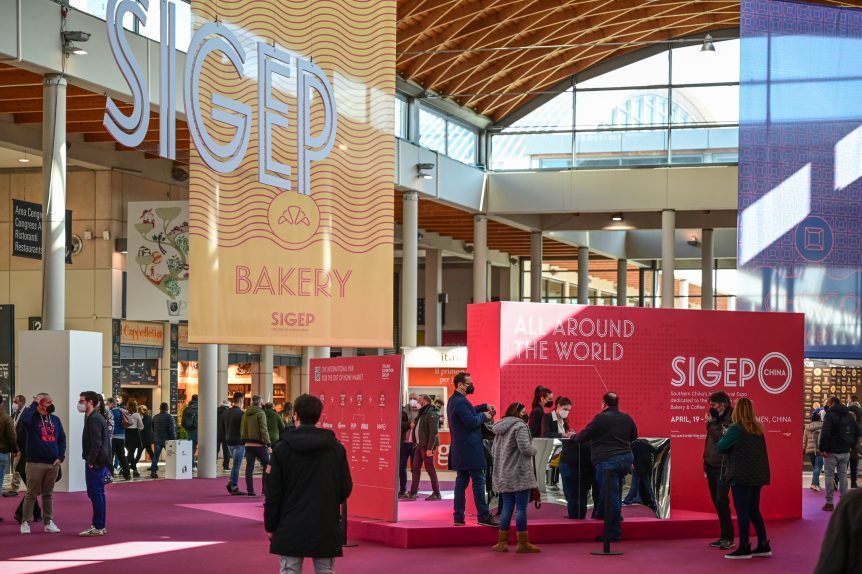 SIGEP 2022, THE DOLCE WORLD WE WERE ALL WAITING FOR

The response of the Sigep community, back to physical attendance after 25 months: 950 brands, 1,000 international buyers with 3,000 business meetings scheduled, foreign operators from over 80 countries

The 43rd edition of Sigep – The Dolce World Expo, Italian Exhibition Group ’s event specifically for gelato, pastry, chocolate, artisan bakery and coffee supply chains, came to a close on 16th March at Rimini Expo Centre. Twenty-five months since the last physically-attended edition and one year after the fully digital show, the international community of out-of-home dolce products was finally able to meet: 950 brands in 90,000 square metres of exhibition space, with over 3,000 appointments scheduled between international buyers (one thousand) and exhibiting companies; 50 hours of talks from the Vision Plaza and the four vertical “Arenas” (Gelato, Pastry, Bakery and Coffee), 100 hours of national and international competitions, demonstrations and show cooking for professionals, plus hundreds of events at exhibitor stands. For the operators at the show, the return to Sigep led to “results beyond expectations”. Compared to the pre-pandemic edition of January 2020, which was an enormous success, attendance at this 2022 edition was down by 25%. Insiders evaluated the overall visitation as highly profiled and businesslike. And from now until Friday, time for the “Digital agenda”, with foreign buyers already booked.

DOLCE FOODSERVICE EVOLUTION, BETWEEN NEW FORMATS AND DIGITAL
Sigep returned in physical form after two years marked by restrictions to combat the pandemic, which the industry tackled with an evolution, digitalising distribution channels, furthering training and investing in research and development to expand the range of products and ingredients, increasingly inclusive with respect to food choices and intolerances, or aimed at energy saving for professional foodservice machinery. The environmental, economic and social sustainability of artisan supply chains, from gelato to pastry, cocoa and coffee, is a concrete response to new consumer behaviour. “Loyalty” has become the key relationship between customer and the upstream supply chain: according to a survey by The NPD Group, 93% of baked dolce product consumers are willing to return to the same sales point compared to 85% of the market average. 10% of out-of-home dolce consumers want gratification compared to 8% of the market. An attitude that explains the recovering numbers in the gelato, pastry, chocolate, artisan bakery and coffee sectors, which were estimated to be worth €9.5 billion in Italy in 2021.

THE SIGEP CHINA DEBUT
In this context, Italian Exhibition Group has been working to internationalise Sigep. After the memorandum of understanding signed just a few weeks ago between Koelnmesse and IEG, on Tuesday 15th, Sigep China was presented to the market and the press at the show. Corrado Peraboni, CEO of IEG SpA, and Gerald Böse, President and CEO of Koelnmesse GmbH, announced the first edition, scheduled to take place from 19th to 21st April 2023 in the city of Shenzhen, at the World Exhibition & Convention Center. Sigep China will be positioned with Anufood China – organized by Anuga, Koelnmesse’s leading food event in southern China.

AMID TRAINING AND COMPETITION
Sigep 2022 reconfirmed its role as a place for important competitions in view of coming international challenges. First and foremost, the national selections of gelato and pastry chefs who will be on the Italian team competing in the Gelato European Cup at Sigep 2023, prior to the Gelato World Cup, also at Sigep, in 2024. And then the winners of the Italian Barista Championship, who will compete in Melbourne for the World Coffee Championship from 27th to 30th September 2022.

The 44th edition of Sigep – The Dolce World Expo together with ABTech Expo will be held at Rimini Expo Centre from 21st to 25th January 2023, back to the usual positioning.