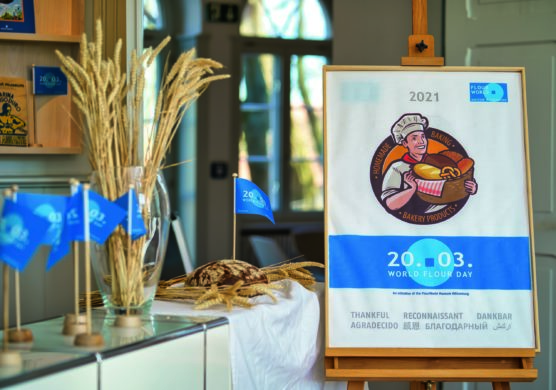 The FlourWorld Museum in Wittenburg, Germany is the initiator of World Flour Day, and as of this year it also houses the Milling Hall of Fame. On 20 March 2021 Marton Schlauri of Bühler AG was inducted as a new member.

“We created the museum as a place of knowledge, inspiration and interaction. These have also always been the motivation and mission of Martin Schlauri. In the name of the worldwide Family of Millers, I would like to thank him for his untiring efforts,” said museum founder Volkmar Wywiol in his welcoming message. Last year, Wywiol, a pioneer in flour treatment for consistent baking results, was chosen as the first member of the Hall of Fame. He grew the Mühlenchemie company into one of the world’s leading specialists in the production of custom flour improvers, enzyme systems and vitamin premixes. Today, thanks to Mühlenchemie 100 million tonnes of wheat are improved every year the world over.

The Milling Hall of Fame honours personalities who have made important contributions to the development of milling. An independent jury inducts a new member every year on World Flour Day.

Sharing knowledge has always been a leitmotif for Martin Schlauri. He led the Grain Milling Training Centre and later the worldwide milling activites of the Bühler company. In this function, he has put his heart and soul into networking the global Family of Millers. He became one of the drivers of the SMS Alumni Association, organising conferences around the world. In 2015 Schlauri built the first African Milling School in Nairobi.

The Hall of Fame has now found a home in the FlourWorld Museum in Wittenburg. Here, the lifetime achievements of its members are honoured in the context of the historical and cultural development of this staple food. Each member receives a bronze sculpture in the form of person on a millstone, created by Berlin sculptor Sibylle Waldhausen.

For the new member of the Hall of Fame, its symbolism is an especially apt depiction of his work. Martin Schlauri: “I’m proud to hold this unique sculpture in my hands. It symbolises two values of central importance in my life as a miller. The millstone stands for the skills of the trade, while the person in motion stands for milling, which is never static. The constantly shifting raw materials and market requirements are what make the milling profession so challenging, but also so exciting.”

The induction of Martin Schlauri provided a suitable framework for World Flour Day. Under the motto “White Gold: A tribute to flour heroes all over the world,” farmers, millers, bakers and companies around the globe told their stories with videos and pictures for this special day. These creative contributions can be seen at www.worldflourday.com/stories and with the hashtag #worldflourday. The FlourWorld Museum also created its own special flour sack for March 20, and it holds a place of honour there.