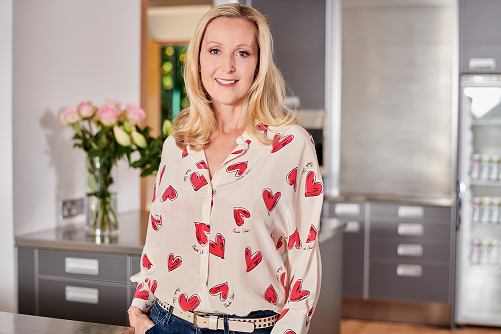 Innovative UK Soup band Re:Nourish, with its focus on sustainability and health has grown a staggering 248%* over the last year thanks to a track record in disrupting the category with game-changing nutritious ingredient led soups that can be heated and drunk straight from the microwaveable bottle. Led by founder and CEO Nicci Clark, November 2021 saw Re:Nourish secure a £2,000,000 investment to fund  new launches and its global expansion initiative, marking a major milestone in the story of the innovative UK soup brand.  The investment sees Re:Nourish launch into the Middle East region.

Founder Nicci has a critical care nurse background, and knowing just how important it is to eat nutritious food to lead a healthy lifestyle. She was compelled to start a brand that would make a difference to the nation’s health. After becoming a qualified nutritionist, she started ‘Nourished’ in 2010, a pioneering diet company specialising in nutritionally balanced fresh meals delivered direct to customers’ door. However, it soon became apparent that her fresh healthy soups were something her customers wanted to enjoy even after their health programme had finished.

Following this success, Nicci headed to the US to learn more about the culinary landscape, where she soon discovered ‘souping’. An increasingly popular food trend amongst health-conscious Americans as an alternative way of getting nutrients in without the high-sugar content of juicing and thought the concept of on-the-go soups could be perfect for Brits with busy lifestyles. She is armed with a wealth of nutritional knowledge and inspiration under her belt her innovative soup brand, Re:Nourish was born.

Award winning Re:Nourish soups all have a health function. From her bestselling “Immunity” – Kale Spinach and Turmeric which is packed full of vitamins to “Digest” – Roasted Carrot & Ginger which is good for the gut. All her soups are also packed with natural vitamins, fibre and protein as well as being easy for the body to digest. Nicci wants people to make a connection between eating well and feeling well. Less processed high sugary foods which often cause health issues later on.

Passionate about innovation and the environment too, Nicci developed the world’s first microwavable bottle for soup which allows consumers to eat Re:Nourish either hot or cold, from a bottle that can be opened, re-sealed and put back in a bag, without being too hot to handle. The Re:Nourish bottles are carbon neutral and fully recyclable – including the cap, label and bottle; meaning consumers really can eat a nutritious meal on the go without compromising on the environment.