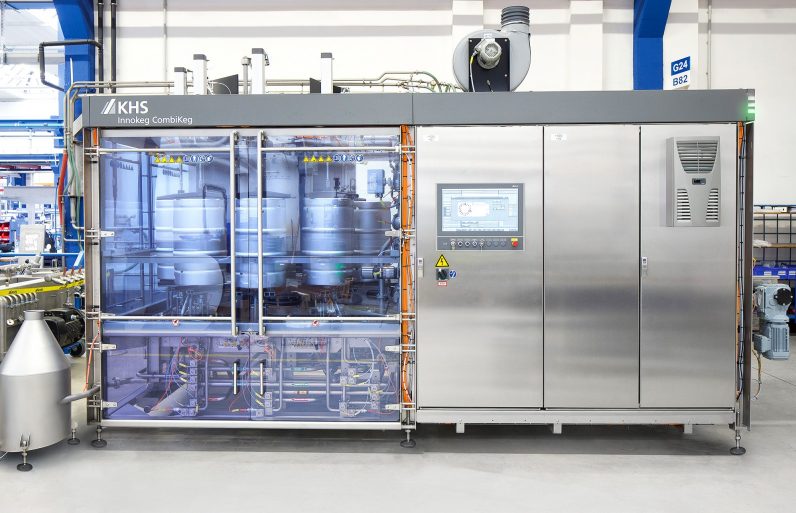 KHS is making its successful Innokeg Transomat and Innokeg CombiKeg keg fillers even more sustainable, efficient and future-proof with a whole host of innovations. As minor as some of these may seem in detail, together they prove extremely effective.

Keg fillers Innokeg Transomat and Innokeg CombiKeg, both established on the market, are the flagships of KHS’ line of business in machines used to rack beer and other beverages into kegs. The Transomat is a modular system for interior washing and filling, designed – depending on the configuration – for the medium capacity range of 80 to 800 kegs an hour holding between seven and 58 liters. This makes it ideal for breweries of all sizes. Since its market launch in 1993 the Transomat has been further developed several times over in order to keep step with industry requirements.

In contrast, the CombiKeg is suitable for up-and-coming craft brewers who have already outgrown the small capacity range and need a machine with an output of up to 85 kegs per hour. Its appeal lies chiefly in its compact format that fits into a standard overseas container. This not only saves a considerable amount of space but also makes for a quick installation and commissioning process. Everything is pre-installed – from interior and exterior washing to filling – so that the system is ready for operation within a very short time indeed: a big move towards providing a plug-and-produce setup.

“As one of the first suppliers of keg fillers and thanks to what now amounts to more than 50 years of kegging expertise, KHS has always been up to the minute in this segment,” says Roger Daum, keg product manager. “We’re constantly optimizing our systems to keep pace with the developments on the market. We’ve now brought both the Transomat and CombiKeg into line with the technological state of the art by introducing a whole set of further developments.” In doing so, KHS is pursuing four goals, Daum emphasizes: “Flexibility, efficiency, safety and viability for the future.”

Numerous technical upgrades are to enable the machines to adapt to as many different containers as possible and fill a diverse range of products – from beer as the key product through carbonated soft drinks, wine and syrup to water. One new feature is thus the pressing cylinder with one-way keg detection where a sensor identifies the keg entering the machine. The program is set on the machine accordingly, with non-returnable kegs not being washed, traveling at a lower speed and being subjected to a lower pressure, for example. Subsequently, all standard market non-returnable kegs can be run on the system, including those with an integrated bag. For the latter a patented circuit has also been developed that is directly integrated on the head and thus extremely hygienic. This means that media is changed over in a very small space that is easy to clean.

As a rule, the format parts required for the various fittings can be easily replaced without the need for tools. The Transomat can also be equipped with a reworked filling system as an option. This adjusts the product, supply and return gas pressure and other filling parameters automatically. The new system increases the product spectrum and ensures product quality through gentle filling. It accepts new products and recipes fully automatically without the need for any adaptations, thus saving time, energy and CO2.

The CombiKeg in particular has been provided with a new keg pull-in whose robust design can also process kegs with a higher mass – plus a larger variety of one-way kegs as it is suitable for use with different coupling depths.

Efficiency in the filling process includes the brewer being able to determine exactly how much beer the full keg actually contains. In view of the large range of kegs of varying age that arrive from different manufacturers and breweries and are often run in mixed batches, differences in weight of up to two kilograms are no rare occurrence. In order to eliminate this as a source of error, KHS has developed gross tare weighing used on systems for large capacities.

On the Transomat and CombiKeg KHS’ precision filling and measurement system (certified according to the MID[1] for the European market) makes sure that the kegs are racked with the exact required volume of product. Standardized valves for washing and filling, this technology tried and tested on KHS’ bottle fillers, lower the level of complexity, simplify warehousing and trigger fewer faults. They are suitable for both the soiled caustic generated during the first interior washing processes and for the sensitive filling process – without robustness or hygiene being compromised in any way whatsoever.

On the CombiKeg a new exterior washer with optimized multiple use of the washing water earns extra points by saving on resources. The rotary inspection flap facilitates maintenance as it provides easier access to wear parts in the CombiKeg’s rotor shaft.

When deformed or crooked kegs become stuck in the machine, the operator has to intervene. A pressure reducer between the media valves and treatment heads prevents caustic or other liquids from squirting out of the system. This increases safety for the machine operator if, for instance, the machine cladding has to be opened during production – such as when a damaged keg is not properly seated on the treatment head and has to be corrected or removed. The bottom edge of the Plexiglas safety paneling has also been extended for improved shielding and now covers the media valves. As a further option, machines arranged in blocks can also be safely and individually shut down.

Thanks to the standard integration of IO-Link the systems are equipped with intelligent sensors and actuators for measuring pressure, for example, or level probes. Signals are provided directly without converters and thus without any of the time loss associated with the latter. Furthermore, a data world is created that permits predictive maintenance in the future, for instance.

Claim to leadership in keg filling

The sheer number of all of these significant further developments underlines the Dortmund machine and systems manufacturer’s claim to leadership also with keg filling systems, Daum believes. “With the above we’re creating an ideal setup that allows our customers to continue filling their beverages into kegs flexibly, efficiently, safely and sustainably in the future, too,” he concludes.

[1] MID = Measuring Instruments Directive: the initial verification by an official or state-approved authority required in the past has been superseded by the manufacturer’s declaration of conformity.