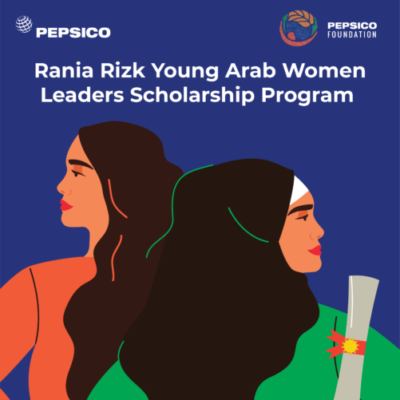 PepsiCo has announced the creation of a new scholarship program to support and empower young Arab women to pursue their higher education and become the leaders of tomorrow. The “Rania Rizk Young Arab Women Leaders Scholarship Program” will be funded by the PepsiCo Foundation, to honor the legacy of the company’s long-time Chief Legal Counsel Rania Rizk, who passed away at the end of last year.

PepsiCo, through its philanthropic arm, the PepsiCo Foundation is partnering with the University Leadership Council (ULC) to manage the scholarship program on an annual basis, and intends to invest $150,000 (AED550,000) in 2021 and awarded in two installments. The first installments of the scholarship seek to benefit female students for a three-year undergraduate Bachelor of Laws degree with the University of Paris II (France’s leading Law School).

The program will build on PepsiCo MENA’s vision to uphold strong diversity policies and encourage the region’s emerging female business talent to make a difference in all aspects of economic and public life. According to World Bank data, the labour force participation rate for women across the MENA region stands at 20%[1] as of 2019, strengthening the notion that equal access to education, work, and financing is more important than ever. The partnership aims to further strengthen the importance of Arab women entering and remaining in the job market – to not only unlock their potential, but also to boost economic growth, create diversity in the workplace, increase earning potential, and create a virtuous cycle of prosperity for families and communities.

PepsiCo intends to raise additional funding to sponsor Arab women in any discipline at universities in the region and globally. PepsiCo will work closely with the ULC to establish the application process and eligibility criteria. The selection committee will be comprised of the Secretary General of the ULC and a representative of Ms. Rania Rizk’s family.

“Enabling the next generation of strong Arab women through education is a fitting tribute to Rania, who was a passionate advocate for diversity, and inclusion. Rania radiated the personal confidence and courage to voice her opinions fearlessly, at every level, and she had the style to do so in a way that not only compelled others to listen, but also, more importantly, influenced them to act,” said Eugene Willemsen, CEO at PepsiCo for Africa, Middle East and South Asia. “We are honored to establish this scholarship program with the blessing of her family.”

Guillaume Leyte, President of the University Paris II International Law School thanked PepsiCo for its contribution, saying, “I have had the privilege to work with Rania closely and witness firsthand her incredible leadership, keen interest to empower young women, and her firm belief in the study of law as a unique path to exercise responsible leadership. It is my firm conviction that this scholarship will contribute to the dream and vision that Rania wished for every future young woman leader.”

Ms. Rania Rizk’s daughter, Sherine Sbay on behalf of their family, added, “My mother never missed an opportunity to empower and enable young Arab women on their journey to drive change and positively impact the region. She was an incredible woman and role model by all standards, and I could not think of a more fitting and beautiful way to carry forth her legacy than through the creation of this scholarship program.”

The University Leadership Council also paid tribute to the years Rania Rizk spent mentoring UAE youth and young leaders from the wider Arab region as part of her roles on the boards and advisory councils of the Arab `International Women Forum (AIWF), the University Leadership Council, and the BUNYAN initiative for the Capacity-Building of the Youth.

A native Egyptian, Rania Rizk joined PepsiCo in 2005 as legal counsel for Gulf countries and held several senior positions during her 15-year career with the company, earning the admiration and respect of everyone she engaged with. She was a board member of the Arab International Women Forum (AIWF) and represented PepsiCo in many forums and associations. She was one of the first Arab women to assume the role of Chief Legal Counsel for a significant geographical territory on behalf of a large multinational corporate headquartered in the Middle East.

Detailed guidelines and eligibility criteria for intending applicants will be available through the University Leadership Council.