Papa John’s Pizza has rolled out a new first-of-its-kind, all-vegan menu in the United Arab Emirates, featuring dairy-free cheese pies, wedges, and cheese sticks, prompting animal rights group People for the Ethical Treatment of Animals (PETA) to give the company a Vegan Food Award – the first one ever awarded in the Middle East. 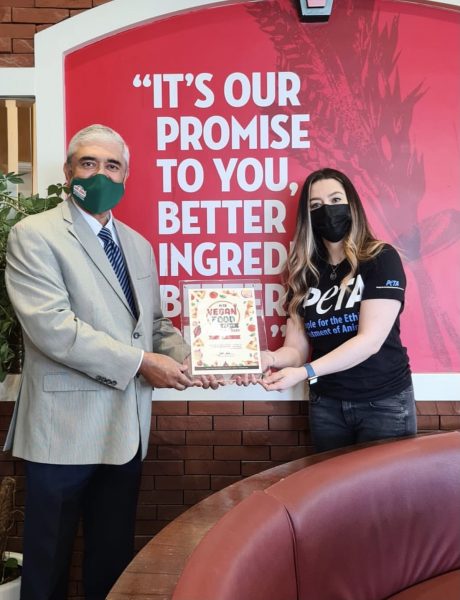 “We are delighted to be associated with PETA in promoting a range of Vegan menu items,” says Tapan Vaidya, CEO of PJP Investments Group, owner-operator of Papa John’s in UAE. “All our Vegan ingredients are well-aligned with our brand promise of Better Ingredients Better Pizza – the Vegan community in UAE can look forward to enjoying high-quality Vegan pizzas! It is indeed an honour to be the first restaurant chain in the Middle East to win this award, we thank PETA for this recognition.”

“No matter how you slice it, Papa John’s vegan pizza is a treat that can’t be topped,” says PETA Senior Vice President Jason Baker. “PETA is pleased as pizza pie to recognise this trailblazing chain for helping diners enjoy dairy-free delights.”

PETA notes that choosing vegan cheese prevents mother cows from being artificially impregnated and then separated from their newborn calves so that their milk can be consumed by humans instead. Vegans also enjoy a lower risk of suffering from heart disease, cancer, strokes, and diabetes than meat-eaters do.

Papa John’s has received a framed certificate and accolades from animal lovers around the Middle East.