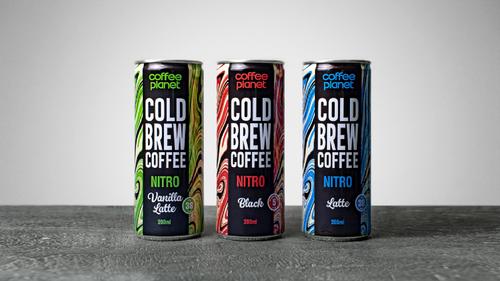 In light of the brand’s fast-moving expansion plans, the Middle East’s largest home-grown coffee roaster, Coffee Planet, takes its next steps with Nitro Cold Brew. Consumers can now enjoy a natural boost fresh off the shelves of some of their favourite stores and outlets in the region including ADNOC and Choithrams, with more in the pipeline.

The official launch of Nitro Cold Brew by Coffee Planet in stores provides a distinguished entrée into the regional Cold Brew segment. Robert Jones, Managing Director of Coffee Planet, says, “Our team is constantly thinking of new ways to service our clients and consumers, and considering the growth in the ready-to-drink market, Nitro Cold Brew was a natural addition for our brand.”

Jones adds, “It was important for Nitro Cold Brew to be accessible, without compromising flavour, taste and quality, which is something we’ve always taken pride in.”

The Nitro Cold Brew crafting process starts with a blend of ground coffees from Arabica coffee farmers, that is steeped in cold water for anywhere between eight and twenty-four hours. Afterwards, the grounds are filtered out of the water, creating a concentrated coffee that retains all its flavour, natural sweetness and original aroma. This longer steeping period allows for a smoother, less acidic taste. The brew is then nitrogenated through a valve in the cans which results in a super-smooth, rich, creamy and foamy drink.

The ready-to-drink low-sugar beverage is launching with three delicious flavours initially – Black, Latte, and Vanilla Latte, with calories ranging from only 5 in the Nitro Black to 38 in the Nitro Latte and Nitro Vanilla Latte and more varieties planned to join the range. Nitro Cold Brew Coffee by Coffee Planet is also available online at coffeeplanet.com, Kibsons, Noon, and Amazon.ae.