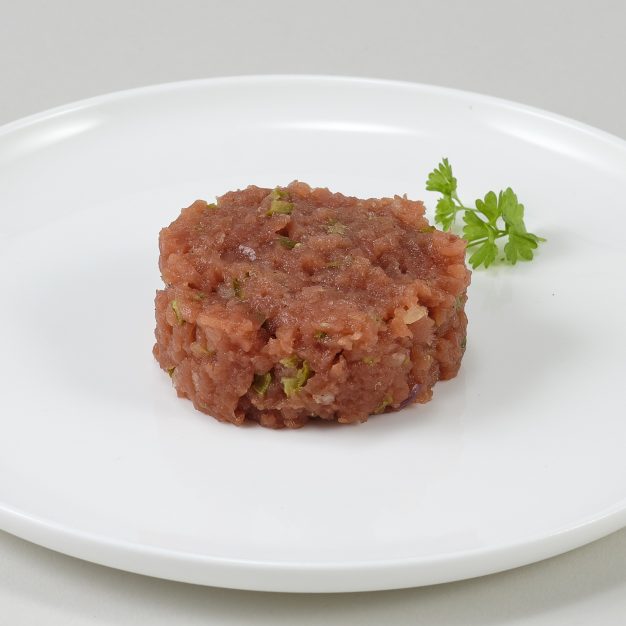 “Plant-based food has become one of the most important food trends of our time. In addition to existing plant-based products, new alternatives are coming onto the market that are more and more similar to meat and fish in flavour and texture,” says trend researcher Hanni Rützler in the newly published Food Report 2023. This year’s IFFA likewise showed that plant-based alternatives, as well as hybrid products, are increasingly a matter of course for the meat products industry. Planteneers is going a step further, and showed visitors new prospects beyond the meat category.

“The meat industry is reinventing itself. We need to meet consumer expectations in modern plant-based nutrition, while avoiding a cannibalization effect,” explains Planteneers Product Manager Florian Bark. “Walking this tightrope is possible only with an expanded portfolio.” Experts consider hybrid products an ideal middle way. For this category, sister companies Planteneers and Hydrosol have developed new stabilising systems that make it easy for meat producers to reduce the animal content in the final product by half. They can thus benefit from the rising number of flexitarians, i.e. people who want to reduce but not eliminate the amount of meat they eat.

Attractive potential is also promised by new product categories that can be manufactured readily with existing machinery. “We see again and again how surprised meat producers are when we show them that they can also make cheese or fish alternatives with their existing equipment,” says Florian Bark. Fair visitors weren’t surprised just by the new production possibilities, but also by the quality of the plant-based products, be it the finely layered structure of the salmon alternative or the flavour and texture of the plant-based parmesan and feta. “Fair visitors were very impressed by the bandwidth of our new product ideas,” says Bark. The same goes for meat alternatives. For example, the plant-based alternative to beef tartare that Planteneers premiered at the IFFA was especially well received.

The Plantbaser: A new era in product development

“Plant-based was clearly the dominant topic at this year’s IFFA. About 80 percent of our conversations with visitors were about plant-based alternatives. New meat and sausage products came in second this year,” comments Dr Dorotea Pein, Director of Product Management at Planteneers. This was reflected in the interest in the PlantbaserTM. Planteneers unveiled this new product configurator to a broad industry audience in May. Using a touchscreen, fair visitors could try it themselves and put together a product the way they wanted it. The rapid growth in registrations reflects manufacturers’ lively interest in this uncomplicated approach to the development of new plant-based products. “Customers were very excited, not least because we are continually adding to the PlantbaserTM,” reports Dr. Pein. “We’re not just adding new products, but also new tools, like the shopping cart. A mobile version is also in the works which will let customers configure their product ideas on a smartphone or tablet.”

As an adjunct to in-house R&D departments, the PlantbaserTM makes it easier for mid-size companies to enter the plant-based market. Digital product development saves users a huge amount of time. They can reduce the number of coordination processes and get new products to market much faster. Innovation development itself is also greatly simplified. Whether cheese and yogurt alternatives, burger patties, cold cuts or plant-based mayonnaise, within 15 to 20 minutes users can put together the plant-based product they want in a variety of categories. This makes product development possible around the world and around the clock, as customers in over 100 countries can attest. Users can see for themselves at https://plantbaser.planteneers.com/.

Since the start of the year four new product lines have been added. Alongside plant-based alternatives to feta, these include processed cheese preparations, in spreadable or triangular versions. The big advantage with them is that they contain none of the phosphates otherwise used as emulsifying salts. Nuggets are another category. The detailed photos and videos on the site clearly show PlantbaserTM users the fibrous structure of the nuggets, as well as the breadings that can be selected as desired. Salami products will soon be added as a further category. By the end of the year, Planteneers hopes to have its entire product portfolio in the PlantbaserTM and so offer medium-sized producers even better support.