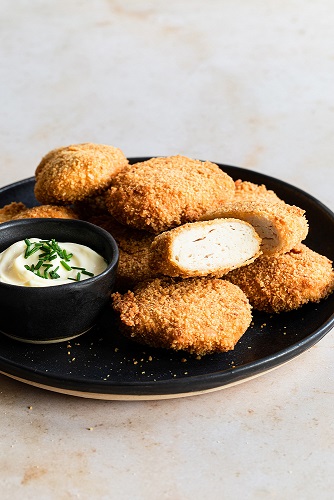 Finnish food tech company SuperGround studied consumer perceptions of taste and attitude towards ground chicken bone mass in familiar foods such as chicken nuggets and meatballs. The study was carried out by sensory experience development and research company Aistila –  a company based on the research and expertise of the University of Turku. In the study, more than 100 people tasted chicken nuggets and meatballs containing processed bone mass. To produce comparable results, the consumers also tasted conventional chicken nuggets as well as beef and pork meatballs without ground chicken bone mass.

Nuggets with bone mass are preferred to those without

Regarding chicken nuggets, three different options were tasted, containing 15%, 5% and no bone mass respectively. Overall, nuggets containing ground chicken bone mass were chosen as the best one by 74% of participants. Nuggets containing 15% SuperGround bone mass were preferred in terms of taste, texture, and overall quality, with 40% choosing them as their favored option. Consumers described them more often as having a meaty taste and being tasty, salty, soft, and juicy compared to nuggets without bone mass. Consumers also described that the bone mass made the nugget texture softer and less dry.

Bone mass in nuggets contributed to a significant increase in overall enjoyment of nuggets. For example, nuggets with 15% bone mass were liked by almost 53% more customers than nuggets with zero bone mass.

“Bone mass does not have an effect on the liking of the odor, appearance, or texture of chicken nuggets or meatballs. But the study results revealed that a clear majority of the consumers feel that the taste and overall quality of the tasted products were significantly improved with the bone mass. In addition to improved nutritional benefits due to increased vitamin, calcium and collagen content, bone mass can possibly strengthen the taste of saltiness without adding extra salt,” says Santtu Vekkeli, co-founder of SuperGround.

He continues: “Due to the consumer interest and improved taste, using bone mass in meat products offers huge benefits for food production companies to be at the forefront of innovation and customer pulse – while simultaneously increasing food production efficiency and sustainability. Naturally, some people have doubts about bone mass in their food even if it is completely hidden and tastes the same or even better. But it is encouraging that a more effective use of animal-based raw material and better nutritional value, among other reasons, are valued.”

The test subjects were also asked how different factors would affect their interest in buying meat products containing softened chicken bones. More effective use of animal-based raw material was listed as the top reason by 69% of the participants. This was followed by better nutritional value due to increased calcium and collagen content (63%), and increased sustainability due to lower environmental impact (58%).

Finnish food production technology company SuperGround has invented a food production technology that softens and grounds chicken bones so they can be used in meat products. The aim of this study – conducted in October 2022 – was to find out how the SuperGround chicken bone mass affects the enjoyment, sensory experience, and choice of nuggets and meatballs. In addition, consumer attitudes toward using softened ground bone mass in meat products were studied. 101 consumers aged between 18 and 55 who consumed nuggets and meatballs regularly were recruited to the study. The consumer group was balanced on gender and age as well as their social situation. Meatballs and nuggets containing 0%, 5%, and 10/15% ground chicken bone mass produced using SuperGround’s technology were studied. Different varieties were handled identically and served to consumers (N=101, regular users of nuggets and meatballs) as blind-coded in a randomized order.