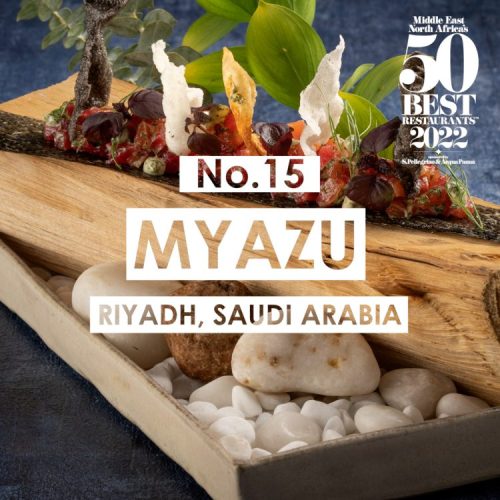 Rooted in Japanese culture, Myazu Riyadh is an authentic, contemporary restaurant that features the very best in upscale, culinary dining. Celebrated as a proud, Saudi-created brand, Myazu Riyadh is lauded for its distinct ability of transporting intrigued, high-caliber diners to Japan – courtesy of its modern yet sleek interiors and exceptional dining and beverage menu.

The latest highlight of the establishment is the announcement of Myazu Riyadh winning this year’s most coveted award of ‘Best Restaurant’ in Saudi Arabia from the Middle East & North Africa’s 50 Best Restaurants – an incredible achievement not just for the curated, homegrown concept but also, for the country, Saudi Arabia, that it calls home.

With the ceremony held in Abu Dhabi and accepted by Myazu’s fellow Chefs Ian Pengelley and Barry Andrews, Myazu Riyadh honorably received this accolade while also acknowledging its inclusion and distinction among a list of other world-famous, global brands.

Receiving the prestigious award and international recognition solidifies Myazu’s immense success within the region’s fine dining industry, in just one year of its grand opening. Welcoming the most sophisticated of diners over the past year complements Myazu’s vision of expansion. “As we celebrate our latest honor of winning the ‘Best Restaurant’ in Saudi Arabia, we also take the time to celebrate our vision in expanding our award-winning, curated concept Myazu to various destinations,” said MFC’s CEO, Faisal Shaker.

Presenting their signature culinary specials, paired perfectly with refreshing beverages, within a refined setting and eclectic ambiance, Myazu Riyadh has affirmed its place as a pillar within KSA’s Japanese restaurant scene.