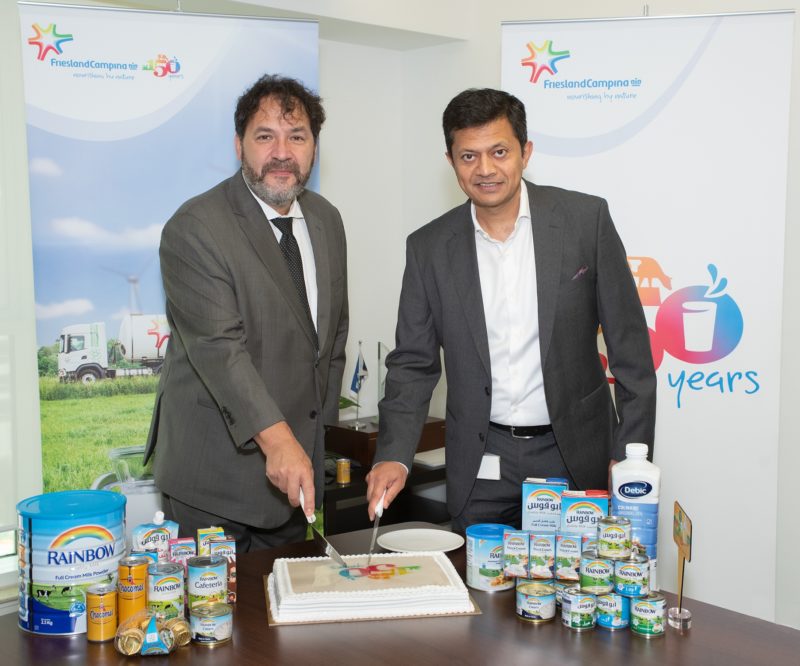 FrieslandCampina one of the largest dairy cooperatives in the world, marked 150 years since its inception. To celebrate this momentous milestone, FrieslandCampina’s anniversary flag was raised at all its production locations across the world on 8th September.

The United Arab Emirates was the first country within the Middle East in which FrieslandCampina decided to commence its journey in 1955. It started to introduce products within the evaporated milk category, popularly known today by its flagship brand name ‘Rainbow’. Previously, refrigerators did not exist and the Evap package would tolerate high temperatures, which made it an essential product in every household. Currently, the company has a strong presence all over the Gulf countries and North Africa.

Rainbow milk is the main ingredient of Karak tea, which is the most preferred beverage in the GCC and India sub-continent. It’s such a significant ingredient that a vintage can of Rainbow milk is displayed at the Dubai Museum. In addition to the Evap packaging, Rainbow also includes ready-to-drink milk, flavoured milk, powder and cream. FrieslandCampina has also introduced the natural Dutch cheese which is popularly known as Frico in the region.

The brand has witnessed the UAE’s development and progress from 1955 till the present date. To truly mark its 150th anniversary a special regional celebration took place at FrieslandCampina’s regional headquarters located in Dubai. The celebration was attended by H.E. Carel Richter, Consul General of the Kingdom of the Netherlands in Dubai, Sumeet Mathur, Managing Director of FrieslandCampina MENA and the staff of the company.

H.E. Richter commented: “It gives me great pleasure to see a home-grown company, that initially started with a small group of farmers, growing over the years and becoming a strong part of the social fabric here in the GCC. I would like to wish everyone that has been part of FrieslandCampina’s great achievements a happy anniversary on this special occasion where we celebrate 150 years of success.”

The Managing Director of FrieslandCampina MENA, expressed his happiness welcoming H.E. Consul General of the Kingdom of the Netherlands in Dubai at the FrieslandCampina office to celebrate the 150th anniversary of the company. Mathur said: “It is a great honour to gather and celebrate 150 years of great success. FrieslandCampina continues to progressively grow, and I am proud to say that the company continues to lead the Evap category within the region. Over the past few years, we have been eager to promote healthy eating habits and an active lifestyle among the younger generation through local and regional partnerships. Our collaboration with the Ministry of Health and the Dubai Municipality helped us promote the benefits of dairy through various school awareness campaigns. We remain committed to our customers to deliver the best dairy products through our sustainability and innovation programs that we have taken to produce quality nourishment with the theme ‘From Grass to Glass.’”

A year later, in 1872, twenty farmers in the Dutch village of Wieringerwaard, in North Holland, decided to collaborate. They collectively bought a building, two cheese tubs and a weighing scale and they appointed a cheesemaker to establish the first official cooperation of farmers.

In Friesland, something similar happened in the village of Warga: a group of farmers united in a cooperative. After many mergers, these cooperatives finally resulted in FrieslandCampina. Today, the dairy industry is one of the most important industrial sectors in the Netherlands.