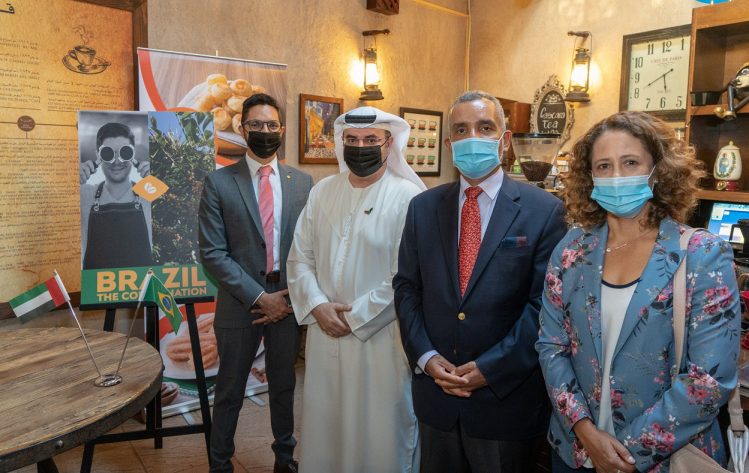 The Embassy of Brazil in Abu Dhabi, in partnership with the Arab-Brazilian Chamber of Commerce (ABCC) and the Brazilian Trade and Investment Promotion Agency (APEX-Brasil), kicked off the Brazilian Coffee Week at the Dubai Coffee Museum.

The exhibition, which reflects the steadily expanding coffee trade between the country and the Arab region, will run until November 26, 2020 in collaboration with Easternmen & Co, Coffee Planet, Nativo.ae, Millen Trading FZE, Ally Coffee and Emirati Coffee.

For the event, a coffee station has been set up at the Museum to feature a UAE-based company importing and distributing Brazilian coffee in the Emirates. Another major highlight of the opening day was Brazilian chef Fernando Lima attending the show and preparing for the visitors some famous Brazilian delicacies, including pão de queijo (cheese bread) and tapioca (cassava pancake), which are usually accompanied with the traditional Brazilian cafezinho.

Brazilian Ambassador to the UAE Fernando Igreja also attended the Brazilian Coffee Week. The Ambassador said: “Coffee should be both an economic and a cultural bridge between Brazil and the Arab countries. Coffee sprang up in the Middle East and Eastern Africa, and it was brought to Brazil during the 17th century to become the basis of the national economy in the 19th century.”

Igreja also noted that Brazil has been the world’s largest coffee producer for more than a century now, pointing out that the volume of Brazilian coffee production in 2019 reached 49,31 million bags with 82 per cent being exported to the main markets around the world.

“Brazil and the UAE are strategic partners, and food security is one of the main priorities of their bilateral cooperation. This strong cooperation is evident in the fact that, despite the coronavirus pandemic, Brazilian food exports to the UAE increased by more than 7 per cent through October 2020.  The ties between Brazil and the UAE have been further strengthened this year as a result of the strategic partnership established by H.H. Sheikh Mohammed bin Zayel Al Nahyan, Crown Prince of Abu Dhabi, and President Jair Bolsonaro during his state visit to the UAE in October 2019,” he said.

The Ambassador added: “Although it is not one of the main products in our trade balance, coffee still represents the close friendship between our countries given its Arabic origin and the fact that Brazilian and Emirati friends normally meet for coffee to talk business and politics or just cultivate friendship.”

Commenting on the event, Rubens Hannun, President, ABCC, said: “We commend the Brazilian Ambassador for this initiative and thank him for always supporting the goals of the Arab-Brazilian Chamber.  The coffee industry in the Arab region is growing with its large population, especially the young professional ones, consuming more coffee products. Brazilian coffee firms can capitalize on these opportunities in the market by offering their unique specialty coffee beverages, and the ongoing Brazilian Coffee Week will provide them with an ideal venue to display what makes their blend different, generate business leads and forge new partnerships. The museum visitors will have an opportunity to taste the featured products to judge for themselves the quality of Brazilian coffee.”

Karen Jones, COO of the ApexBrasil Office in Dubai, also shared that Brazil exported USD 21 million worth of coffee products to the UAE in 2019, and the same level may be achieved in 2020 despite the impact of the pandemic.

“With great interest, we are monitoring the increasing coffee consumption of UAE population. The Arab state has become one of the target markets for the Brazilian specialty coffee exporters in recent years. The Brazilian Coffee Week is a great initiative to showcase the excellent and unique taste of Brazilian specialty coffee and support the companies that are promoting the same product in the UAE,” Jones said.