Shares of plant-based meat substitutes have been traded on stock exchange since last May, and similarly to most stocks traded on capital markets experienced significant decline in the middle of March. Yet, the company has grown in more than 100% since that. Why? Meat processing plants had to close down due to coronavirus pandemic, and, according to Alpho analysis, as shutdown caused meat shortages, fast-food chains began to substitute meat with plant-based options.

Based on data provided by DPA agency, American consumers began to complain about lack of meat burgers in Wendy’s chain offer. According to Nielsen, meat price has increased in 8% since 25th April due to the negative situation within American food chains. 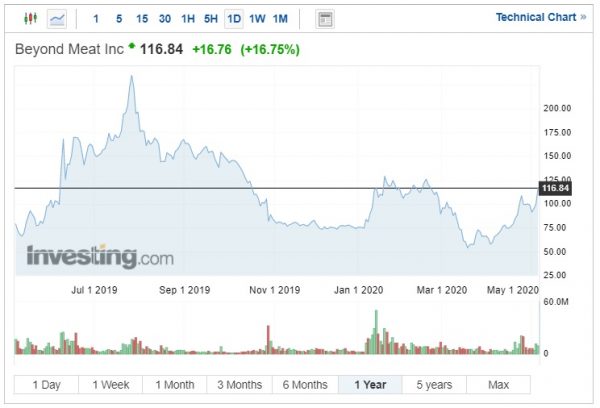 Beyond Meat is profiting from the situation during pandemic, and it has been reflected in the company’s quarterly financial report. During the first three months of 2020, the company reported profit of $1,8 million. Sales rose year-over-year in 141 % to $97,1 million.

Beyond Meat’s shares have been growing since initial decline right after COVID-19 pandemic outbreak. Starting in the middle of March, when shares dropped to $54 per share, they added up roughly 114%, while its opening value was around $116 per share in the beginning of May.

Due to the measures implemented by governments and supply chains disruptions, the price growth does not concern meat only, but food in general. In China, for example, food prices grew 18,3% in year-over-year comparison in China during March, and price of pork increased in 116%.