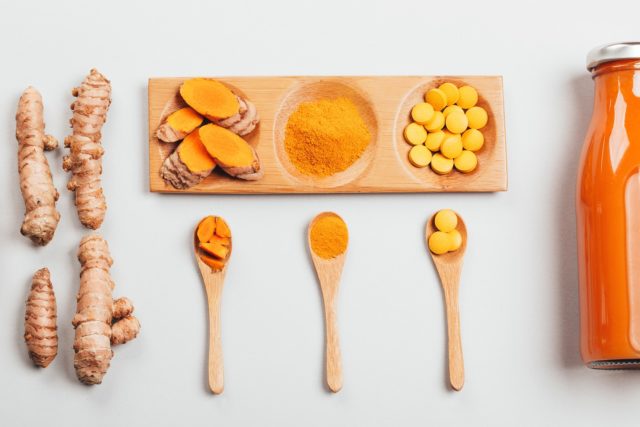 Results of a new study reveal Arjuna Natural Pvt, Ltd.’s proprietary turmeric extract as effective as paracetamol in reducing pain and other symptoms of knee osteoarthritis (OA). The study demonstrated that the highly bioavailable compound was more effective in reducing inflammation. Osteoarthritis is a degenerative disease of the articular joints characterized by the breakdown of cartilage, joint lining, ligaments, and underlying bone. Common manifestations of osteoarthritis are stiffness and pain.

Led by Shuba Singhal, PhD, this randomized, controlled clinical study was conducted at the Department of Orthopedics of Lok Nayak Jai Prakash Hospital/Maulana Azad Medical College, New Delhi. Results were published in the journal Biomed Central BMC. For the study, 193 patients diagnosed with osteoarthritis of the knee were randomized to receive either turmeric extract (BCM-95®) as a 500 mg capsule two times daily, or a 650 mg tablet of paracetamol three times daily for six weeks.

These encouraging results were positively reflected in the BCM-95 group’s serum inflammatory markers: CRP levels were reduced by 37.21%, and TNF-α levels were cut by an impressive 74.81%, indicating BCM-95 performed better than paracetamol.

The study was a follow up to an Arjuna study conducted over a year ago that demonstrated a positive link between its flagship high-bioavailable curcumin formulation and osteoarthritic care. “The goal of the current study was to build on the earlier studies to give a better clarity and specificity by including more markers and a better scoring methodology,” explains Benny Antony PhD, Joint Managing Director for Arjuna. “The anti-arthritic effect of BCM-95 in osteoarthritis is attributed to its capability to modulate anti-inflammatory markers TNF and CRP.”

Knee OA is the leading cause of disability and pain among adult and old age populations. An estimated 10 to 15% of all adults older than 60 years have some degree of OA, with prevalence higher among women than men. “This Study re-affirms the anti-arthritic effect of BCM-95 and provides renewed hope for millions to improve their quality of life“, notes Nipen Lavingia, brand innovation advisor for Arjuna Natural based in Dallas, TX, USA. “It is no wonder that leading natural supplement brands supporting joint health, have chosen BCM-95.”

“We are learning more about the mechanisms behind curcumin’s anti-inflammatory effect which we believe is a result of its ability to inhibit pro-inflammatory signals, such as prostaglandins, leukotrienes, and cyclooxygenase-2. In addition, curcumin has been demonstrated to suppress several pro-inflammatory cytokines and mediators of their release, such as tumor necrosis factor-α (TNF-α), IL-1, IL-8, and nitric oxide synthase,” explains Antony.

BCM-95’s unique fusion of curcuminoids and turmerone-rich essential oil components overcomes curcumin’s characteristic bioavailability hurdles due to its inherent high lipophilic nature. In a previous pilot crossover investigation in human volunteers, the relative bioavailability of Arjuna’s formulation was shown to be nearly seven times higher than standard curcumin and scored considerably better than curcumin–lecithin–piperine formulations, as demonstrated by free curcumin levels detected in the blood.

For more than a quarter of a century Arjuna Natural (Arjuna Natural Pvt., Ltd.) has been India’s leading manufacturer of standardized spice and botanical extracts for food supplement industries dedicated to ecofriendly and sustainable practices. Established in 1992, the company has grown rapidly, with customers in 64 countries and has an advanced research facility that works in collaboration with international universities on phytochemistry, pharmacokinetics, formulation, development, pre-clinical and toxicity studies. Arjuna Natural’s facilities comply with the highest world standards, are GMP-certified, and have ISO, NSF, Halal and Star-K kosher.