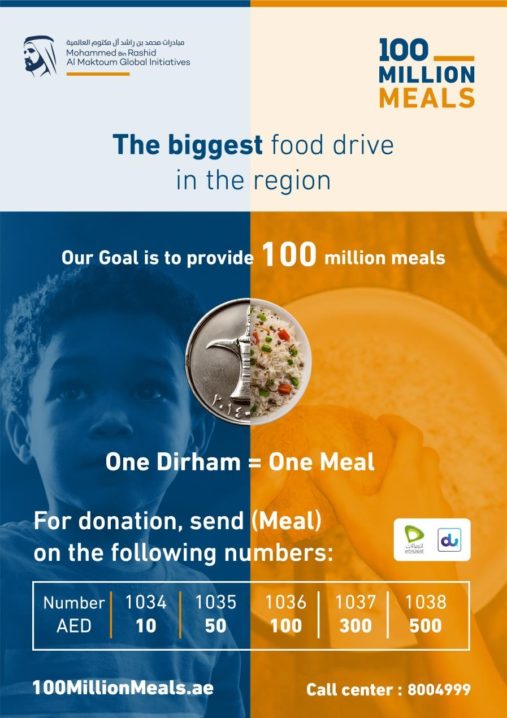 His Highness Sheikh Mohammed bin Rashid Al Maktoum, Vice President and Prime Minister of UAE and Ruler of Dubai, launched ‘100 Million Meals’ campaign to provide food parcels for families and people in need across 20 countries during the holy month of Ramadan.

Businessmen, companies and the public inside and outside the UAE are invited to make financial donations to the campaign that will distribute food parcels, sufficient to provide 100 million meals, in countries including Sudan, Lebanon, Jordan, Pakistan, Angola, Uganda and Egypt. A donation as little as AED1 is enough to secure one meal for underserved communities in the targeted countries.

The Mohammed bin Rashid Al Maktoum Global Initiatives (MBRGI) will coordinate with the Food Banking Regional Network and local humanitarian organizations in beneficiary countries to deliver food parcels to the doorsteps of vulnerable individuals and families.

Sheikh Mohammed bin Rashid Al Maktoum said, “providing food during the holy month of Ramadan is the best we can give from the UAE to humanity.”

He added, “the COVID-19 pandemic has pushed many populations into an economic despair and pushed us, at the same time, to be more compassion and giving.”

Urging the public to do their part, Sheikh Mohammed bin Rashid Al Maktoum said, “we will work with humanitarian organizations, companies, entities and humanitarians to join us in securing 100 million meals to bring a sense of safety to underserved homes across the world.”

Philanthropy is an integral part of the UAE’s philosophy since its inception. Sheikh Mohammed bin Rashid Al Maktoum stressed the need to unify efforts and leverage necessary resources to combat world hunger.

“Four hours away from us are 52 million people battling hunger. We need to take urgent action to empower underserved communities.”

Sheikh Mohammed bin Rashid Al Maktoum added, “Today, we have the opportunity to send 100 million messages of peace from the UAE to 20 countries across the world.”

The campaign is part of UAE’s response to global efforts to combat world hunger, a major challenge that has been exacerbated by outbreak of COVID-19 that has pushed millions of disadvantaged populations to greater insecurity, poverty and unemployment. The campaign also aims to support the international community in achieving the second of the 17 United Nations Sustainable Development Goals to end hunger by 2030.

The MBRGI will carry out the campaign in collaboration with the UN World Food Programme, the Food Banking Regional Network, humanitarian and charity organizations in beneficiary countries, Mohammed bin Rashid Al Maktoum Humanitarian and Charity Establishment (MBRCH), and UAE federal and local entities.

Companies, businessmen and individuals from all over the world can donate any amount starting from AED1 through the website www.100millionmeals.ae or through a bank transfer to Dubai Islamic Bank account with IBAN no.:AE080240001520977815201.

Donations inside the UAE can also be made through SMS (Etisalat and Du) by texting “Meal” to numbers listed on the website depending on the number of meals selected for donation.

More than 820 million people are undernourished globally, including 52 million people across the MENA region. Malnutrition contributes to about 45% of deaths in children under-5 years of age and hunger claims a child’s life every 10 seconds. Hunger causes more deaths than AIDS, malaria and tuberculosis combined.

Besides joining global efforts to combat world hunger, the ‘100 Million Meals’ campaign also aims to raise awareness on reducing food waste and to promote responsible food consumption. Although global food production is sufficient to feed 10 billion people (the current population is 7.8 million people), an estimated 1.3 billion tonnes of food is wasted globally each year, one third of all food produced for human consumption, amounting to $2.6 trillion. One-fourth of the food wasted globally could be enough to feed 870 million people.

The campaign aims to foster solidarity and promote individual and corporate responsibility, encouraging all segments of the society to take up philanthropy as an integral part of their lifestyle.

It also reflects the UAE’s humanitarian principles and dedication to aiding the vulnerable through swift action. The UAE has dedicated major resources to combating hunger and malnutrition, being named the world’s fifth largest donor to the World Food Programme, with 2019’s contributions amounting to $270 million.

The MBRGI, organizer of the ‘100 Million Meals’ campaign, was established in 2015, combining under its umbrella over 30 humanitarian and developmental initiatives and entities. The ‘100 Million Meals’ campaign falls under MBRGI’s Humanitarian Aid and Relief, one of the five pillars of the foundation’s operations that cover Healthcare and Disease Control, Spreading Education and Knowledge, Innovation and Entrepreneurship and Empowering Communities.

The ‘100 Million Meals’ campaign is the latest addition to the foundation’s humanitarian, social and development initiatives that are primarily devoted to supporting and empowering vulnerable and disadvantaged communities around the world.

Established in 2013 at the International Humanitarian City in Dubai, the Food Banking Regional Network is a nonprofit umbrella organization for food banks in the region. It aims to unify regional food banks and coordinate nutrition relief efforts to provide swift joint action to help those in need. Food Banking Regional Network will provide the necessary logistical support to ensure delivery of food parcels to beneficiary countries.